Lyme Disease and the Parasite Effect.

Parasites; it’s a subject no one seems to want to talk about, and no wonder it not a nice subject to chat about over dinner, is it? But they are here and you have them even if you haven’t got Lyme disease.

If you have food allergies or food intolerances, or if you get headaches. You may have digestive issues or a reduced immune system. It might be joint issues or muscle weakness. Even anxiety and other mental issues and much more. You really need to seriously think about the possibility that parasites may be playing a major part.

These little critters are found in Pork, Beef, Chicken, Fish they are in fruit and veg too. Also, our household pets bring them into our lives too.
In our experience, anyone with Lyme disease should start a parasite cleanse as part of their recovery plan. Even if you have had negative tests results. We had blood and stool tests they all came back with negative results for parasitic worms. Even the Functional Doctor we were under at the time said we didn’t need to do an anti-parasite cleanse.

Little did we know that we were in fact infested with parasites and the medical advice was wrong. In fact, it was by chance really that we found out. I was watching an interview and I nearly turned it off because he was talking about things we were already doing. Then he said, ‘and even if your test for parasites comes back negative, you will still have them’.

He mentioned a herb I’d never heard of. He said his wife had Lyme and she got rid of half her symptoms in 12 months by using only natural remedies. He was right!

Now that got my attention.

We have literally passed 1000’s of these creatures through bowel movements. How the human body can house these things and continue more or less as normal is a mystery. Personally, I know for sure that everyone carries a population of parasites with them at all times.

Young or old. A good friend of mine is a mortician, and I have heard it from him, that when a body dies parasites leave the body looking for a new host.

Has that got your attention?

It has been found that up to 45% of the Lyme infection is carried in parasites. They live breathe and excrete inside us, they also carry their own infections of bacteria and viruses. The affiliated links between parasites and Borrelia Burgdorferi are well documented as is the impact on the immune system and the side effects these unwanted lodgers have on the human body.

So, What is a Parasite?

The very word parasite should send shivers up our spines, it means; ‘An organism that lives in or on an organism of another species (its host) and benefits by deriving nutrients at the other’s expense.’

There are three main classes or types of parasites that can cause disease in humans:

Each class of parasite has different groups or species of parasites. It’s Protozoa and Helminths that we are going to concentrate on in this post. And we will start with Protozoa.

Protozoa are microscopic, one-celled organisms that can be free-living which means they don’t need a host. Or they are also parasitic in nature, meaning they live on or in a host. They multiply in the human body; this aids their survival and allows serious infections to develop from just one single celled organism. Contaminated foods or person to person contact are one of the routes of transmission by protozoa, and they mainly live in the intestines. Protozoa that live in the blood or tissue of humans are transmitted to other humans by an arthropod vector, for example, through the bite of a tick, mosquito or sand fly.

Protozoa are a very varied group of single-celled organisms, with more than 50,000 different types represented. The vast majority are microscopic, many measuring less than 1/200 mm, but some, such as the freshwater Spirostomum, may reach 0.17 in (3 mm) in length, large enough to enable it to be seen with the naked eye. Protozoa are found in almost every possible habitat. Mainly found in developing or 3rd world countries.

Protozoa is a class of parasite that has a species e.g. Amoebozoa which has a family of Plasmodium, Entamoeba (which can cause malaria) or Giardia lamblia (giardiasis). Understand, no neither did I at first.

One of the worst experiences we had were parasitic cysts. It was like looking down the toilet at Jurassic Park! Protozoa have two-phase life cycles, alternating between proliferative stages (increase in numbers) and dormant cysts. As cysts, protozoa can survive harsh conditions, such as exposure to extreme temperatures or harmful chemicals, or long periods without access to nutrients, water, or oxygen for periods of time. And if you’re wondering why you have aching muscles in your neck or feel full body weakness, it could be parasitic encysted larvae. They can live in our muscle fibre, they hijack the cell and hide in it like a cave.

This is called a ‘Nurse Cell’ the Larvae lie “coiled” up in these “nurse cells”. Respiratory and muscles are most heavily affected.

Are you scared yet? I was.

Parasitic worms, also known as helminths, are large macroparasites, which as adults can generally be seen with the naked eye. Many are intestinal worms that are soil-transmitted and infect the digestive tract and gastrointestinal tract.

Helminths are large, multicellular organisms that are also visible to the naked eye in their adult stages. helminths can be either free-living or parasitic in nature. There are three main groups of helminths that are human parasites: 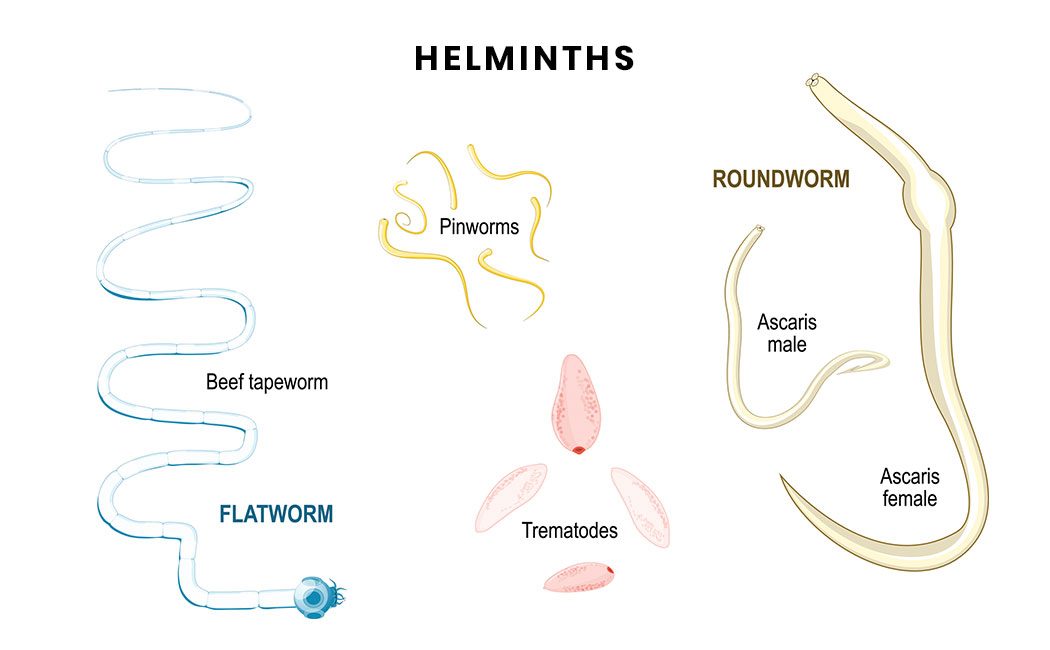 Tapeworms embed their heads into the intestinal wall and remain there. From there, certain types of tapeworms can produce eggs that mature into larvae that migrate to other parts of the body. A tapeworm looks like a long, white ribbon. They can grow up to 80 feet long and can live in humans for up to 30 years!

What are the long term effects, if you don’t kill off parasites?

Kathleen McAuliffe is an award-winning science writer in her book ‘This is Your Brain on Parasites’, tells how tiny creatures manipulate our behaviour and shape our society. She goes into great detail about how these infections can cause certain illnesses, it a powerful read, here’s a paragraph:

‘With astonishing precision parasites can coax rats to approach cats, spiders to transform the patterns of their webs, and fish to draw the attention of birds that then swoop down and feast on them.

We humans are hardly immune to their suspected influence. Organisms we pick up from our own pets are strongly suspected of changing our personality traits and contributing to recklessness and impulsivity even suicide.’

In July 2000 The Guardian wrote a story about parasites with a headline ‘Suicidal rats hint at mind-bending parasite’. A group of Oxford Scientists have shown how a Protozoa parasite called Toxoplasma gondii can take control of the mind of its host. They reported that the microbe infects 1 Briton in 5 and can persuade a rat into a suicidal attraction to cats. Toxoplasma gondii is common in rodents, but can only replicate in cats. So, according to Manuel Berdoy, David Macdonald and Joanne Webster, in the latest Proceedings of the Royal Society, this parasite has to make sure the rat it infects is killed and eaten by a cat.

What about the Horsehair worm that infects insects. Then after developing over a few months start to control their behavior. The worms make the insects make a kamikaze dive into water. Then they escape through holes bored in the insect’s exoskeleton. They then leave the insects sometimes still alive to drown or get eaten.

The proof and science stories go on and on so you probably get the point. Whether you have Lyme disease, CFS or are a pro athlete looking to improve.  It’s a fact that we have unwanted hitchhikers feeding from us.

So What do we do?

The NHS obviously recognise parasites but not the full effects. If your child has pin worms then they’ll hand out a course of Anti-Parasitic drugs or creams to sort the problem out. But what if it doesn’t see the full picture. As I said above we had all the tests and came back clear only to find we were in fact infested. We started taking, Black Walnut, Wormwood, Oregano Oil, Apple Cider Vinegar, Papaya seeds and Pumpkin seeds, Coconut oil and Clove oil. (More on these in the next parasite post). We also did a full liver cleanse using epsom salts.

These natural treatments did get rid of some of the surface parasites, but how do you clear out those encysted larvae tucked away with their feet up enjoying life in those nurse cells?

For Lyme disease parasites are our common enemy they go together. Most Lyme patients are magnesium deficient. We were told we needed to take Magnesium so we did. But magnesium can feed lyme and parasites. They thrive on the stuff. And we had to mention this to health practitioners ourselves.

We had to find other ways of getting the magnesium in to our system. Without it touching our digestive tract or intestines. Which is where a lot if not most of the infections exist in the first place.

On a side note; you need to be beware aware of supplements that have magnesium stearate in them, this played havoc on our gut, because of the magnesium.

Long term effects of parasite infections can be clearly seen in my opinion. It’s one of the great health travesties. We regularly worm dogs cats and all other pets, we worm kids with pinworms but why not adults?

The symptoms and illnesses we now see in people who are suffering. They are from are the very same ones or similar ones that are caused by parasites. I’m not saying it’s just parasites, but it has to be high on the list.

If I was going to be cynical, then the unrecognised symptom list caused by parasites are actually increased sales for the Pharmaceutical Industry. By 2021 the global sales for all drugs is forecast to be  $1.1 trillion.

How do they know? How can they know that many people are going to become ill? I suppose It’s just good guess.

Kathleen McAuliffe
Video: THIS IS YOUR BRAIN ON PARASITES